This email contains information on

Please note the N/B bus stop at Albert Place and the S/B bus stop at Croall Place will remain closed during the course of next week.

This two-stage right turn will be the first of its kind in Scotland and will be open at the end of October.  It has been successfully used in London and other European cities and allows people on bikes – especially less experienced cyclists – to turn right safely, without waiting in the centre of the junction on Leith Walk. 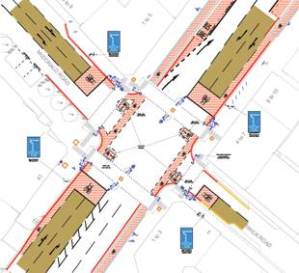 This is the image included in Mr Motion’s email. LCCC has asked him to supply a high-resolution version.

At the end of October cyclists on Leith Walk will also be able to use around 700m of segregated cycle lanes on the east and west sides of Leith Walk between Iona Street and Brunswick Street.  These lanes go behind bus stops, leaving space for bus passengers and will have clearly marked crossing points to allow passengers to cross to or from the stops.  An animated film, produced in association with Sustrans, showing how both these improvements will work can be found here.

A series of engagement events have been held throughout September to inform and gather feedback from the public on the proposed design for Picardy Place, which is intended to improve public realm, pedestrian and cycle infrastructure, and public transport integration as part of the St James development.

Further engagement events will take place, with the first to be held in October, enabling the Council to explain how the design has evolved, discuss the feedback received to date and seek views from the public on how the design could be improved.  A date and location for the event in October will be confirmed shortly.  A final, detailed report on the design will be presented at committee in December, taking into account feedback received during the engagement process.

Alongside the period of engagement, contractors are scheduled to begin enabling works in October, including the temporary removal of the Paolozzi sculptures and Sherlock Holmes statues in the area.  However, this will not include any work on the construction of the new layout.

We will be in contact again in due course with further information on our plans.  In the meantime, if you have any questions on the Leith Programme Phase 4 project, or any other information noted above, please contact: leith.programme@edinburgh.gov.uk.