(adapted from an email from Lindsay Glasgow, Asset Strategy Manager at Edinburgh Council) 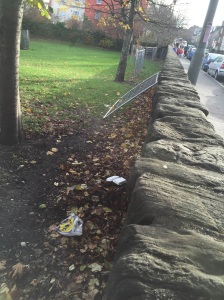 Enquiries by Leith Central CC members about walls in Pilrig Park that have been fenced off for some time have elicited the following response from Edinburgh Council.

Regarding the walls adjacent to the Gaelic School, SfC have undertaken no recent works thereabouts and had no works planned for the immediate future. A survey inspection will however be scheduled in the near future in consultation with Children and Families.

A contractor has been appointed to carry out rebuilding works to the corner wall. An earlier inspection identified that this was has not been tied-in properly and has also sustained impact damage. The contractor intends to undertake the remedial work during the festive break (and be completed before the schools return on 6th January).

It was identified that there is a significant lean in this wall. Heras fencing has therefore been erected as a precautionary measure until the wall is repaired. The wall is being monitored and early instructions will be issued to repair the wall should further movement be identified.